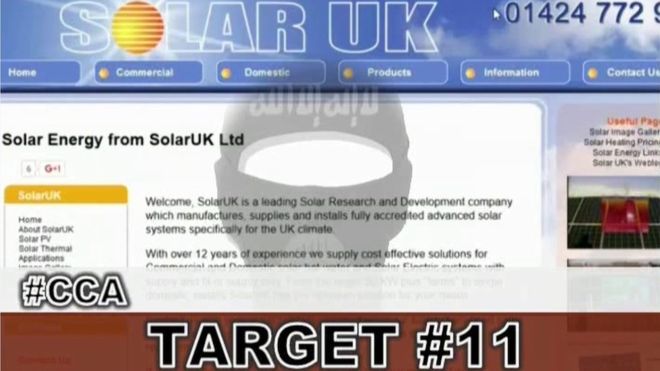 Hackers supporting the Islamic State group launched an attack on a small solar energy company in Sussex with just 11 members of staff.

The so-called Caliphate Cyber Army (CCA) said it took down the Solar UK site in revenge for a drone strike which killed Junaid Hussain, a British hacker in Syria.
It later released a video which boasted of its attack on the firm.
Duncan Lee, a founder of Solar UK, said the attack was “ridiculous”.
“I’m not expecting masked gunmen to appear on my doorstep at any point soon,” he said.
Birmingham-born Junaid Hussain was described as a “top cyber jihadist” and played a key role in radicalising and recruiting others to plan attacks.
He was married to former punk musician Sally Jones from Chatham in Kent, who remains at large in Syria.
The initial cyber attack on Solar UK happened at the end of January, when the company discovered its website was down and replaced with CCA material.
Mr Lee said: “We just thought, ‘ah well, we’ve been hacked, fair enough’. We didn’t know we were on a video at that stage.”
A Sunday Times reporter contacted Mr Lee with the news the attack on his company featured on the video, which also showed beheadings.
The video boasted about recent hacks on other organisations and firms.
“We were number 11 on the list. Can you believe it? Ridiculous,” Mr Lee said.

Mr Lee said the Solar UK site was down for about two and a half hours and the offending IP address had been traced to Kuwait.
He believes his company, based in Battle, was targeted by a search robot trawling the internet looking for websites with a particular vulnerability.
“We don’t have high security; we don’t hold credit card information or anything like that,” he said.
He said security had been stepped up since the attack.
Source: http://www.bbc.co.uk/